How to Get to Denali National Park 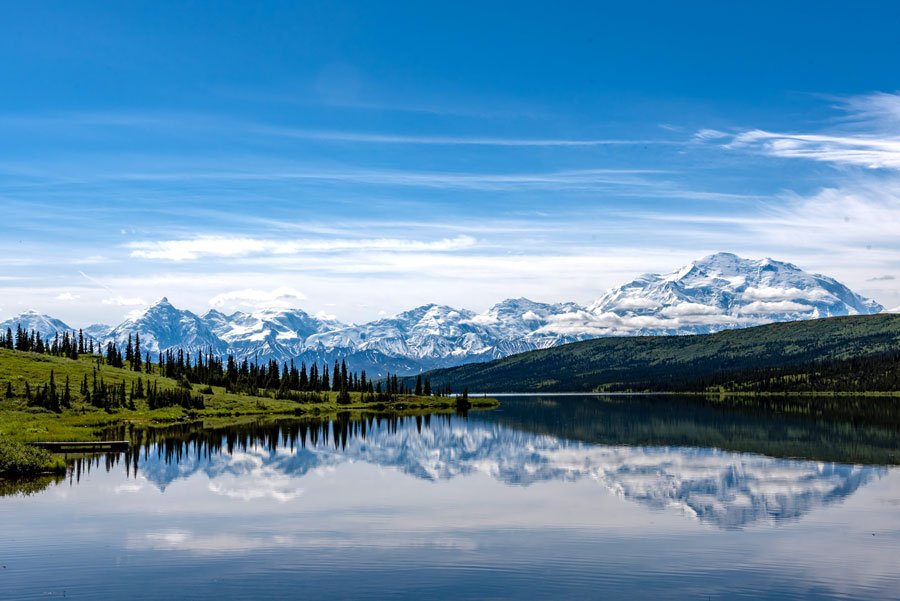 Denali National Park contains some of the world’s most majestic and extraordinary views, experiences, and culture, from vast open skies to one of the world’s seven wonders. How do you get there, though? Its isolated state makes it an adventure in and of itself to get to the park, but once you’re there, it’s worth it. Here’s all you need to know about travel, lodging, activities, and surrounding areas.

To first get to Denali National Park, you must travel to Alaska! Depending on where you’re from, a quick flight, drive, or train ride to Fairbanks or Anchorage, Alaska, is in store for you. Both are the closest major cities to the park, with Fairbanks being 120 miles north and Anchorage being 240 miles south of the park. What activities or trips you have in mind will impact which major city you choose to stay in or if you choose a major city at all! Talkeetna, Alaska, is the closest settlement near the national park 100 miles south of the entrance and is a giant hotspot for Denali tourists. It’s cute and charming and hosts a rich local history that can be a daily activity.

After that, getting to the national park itself is very simple. It’s accessible by the Alaska Railroad bus, private vehicle, or floatplane service. Each mode of travel will bring you to mile 237 of Highway 3, the park’s entrance, and then you’ll be at Denali National Park!

Several towns and cities host a large portion of Denali National Park tourists. The top towns are Healy, Fairbanks, Cantwell, and Talkeetna. However, Talkeetna and Fairbanks are the best cities for travel flexibility and surrounding culture. Both have airports and train stations that regularly service Denali National Park. With an abundance of hotels, motels, and Airbnb, it’s easy to get the whole Alaskan experience in these two picturesque towns.

Specifically in Talkeetna, there is a gorgeous local history. Founded by Native Mountain and Indigenous Peoples and located at the base of the Alaska Range, the town was a popular area for mining and the railroad. After the 40s, the first air landing strip was built, and air travel became a large part of the local culture. Nowadays, Talkeetna hosts global tourists traveling toward Denali and features a lovely historic district perfect for pre/post-Denali sightseeing. Flightseeing tours are a part of the local culture and an absolute must-see Denali’s summit.

At Denali National park, there are several activities to do. There are hiking tours, fishing campaigns, camping sites, mountain climbing, and flightseeing tours, to name a few. Other than your typical national park activities, Denali National Park is unique because it hosts flightseeing tours or a chartered plane service that tours the terrain up close and personal. This is a once-in-a-lifetime experience as the semi-private floatplane can get closer to the landscape and monuments than any other activity on foot could. These flights typically take off from Talkeetna, as previously mentioned, which is perfect if you’re lodging in the town anyways.

The park entrance for the Denali National Park is located on mile marker 237 of Highway 3, or the George Parks highway. Once you arrive at the National park, you’ll want to visit the Denali visitor center for a full rundown of the terrain, weather, announcements, and activities. You’ll want to know everything about seeing the Denali National Park treasures before you head out! Once you’ve visited the visitor center, you’ll park or continue. One important thing to note is that the Denali Park road is the only road going through the national park and is only partly open to private vehicles. Your best bet is to arrive at the park (whether by car, bus, or train) and take a bus throughout the park. Then, book a flightseeing tour out of Talkeetna for a more personal tour via floatplane. Most tour services are open only from spring to summer, so check dates before planning your trip!

Even though the park is highly popular, the weather is king for Denali National Park. It’s primarily open in the summer, but the weather can get nasty. So heed your park ranger’s recommendations and follow all safety protocols. Denali national park is still highly dangerous on foot and in the air, so ask the locals and Alaskan bush experts what to look out for on your trip.

Currently, the only difference in park operations is the closure at Mile 43 of Denali Park Road. It is closed due to the Pretty Rocks Landslide, but via floatplane service, it does not affect the tour! You can still reach Denali via floatplane and have an exhilarating experience at the national park.

Touring and traveling to Denali National park is a bucket list must, and the park’s entrance is highly accessible via any travel. However, there’s always personal preference. For safe hiking, camping, and sightseeing excursion, follow the professionals’ advice and have fun!